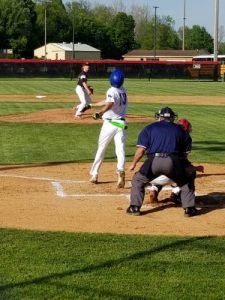 TOPEKA, IN. – The LaVille Baseball team tries to avenge a regular season finale loss at Bremen when the two neighbors meet in the semfinal round of the IHSAA State Baseball Tournament.  The May 25 encounter is set to begin at 11 a.m.

In the May 20 game,  the Lions picked up two runs in the bottom of the eighth inning to capture a 5-4 extra-inning loss at Bremen. Jimmy Fischer and Connor Wieczorek each hit a home run in the loss for LaVille.

It ended a LaVille four-game winning streak, as LaVille won eight of its final 10 games on the season.

The Class 2A Westview Sectional championship is scheduled for Monday, May 27, at 11 a.m.