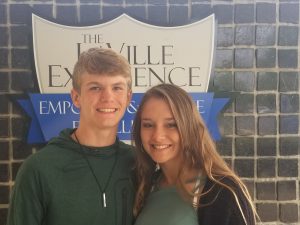 LAKEVILLE, IN. – After nominations from spring head coaches, and an open vote on www.lavilleathletics.com, softball player Hannah Filley and track member Ethan Yoder have been selected April Athlete of the Month.

“Participating in athletics has meant being a part of something bigger than myself,” said Filley.  “Being an athlete and trying out for new teams is nerve-wrecking, especially when you struggle with social skills already. Being an athlete pushes you to go out of your comfort zone to try new things, new positions, and make new friendships that eventually build to being strong enough, you consider your teammates family. Being an athlete made me whole I am today. I overcame obstacles physically after surgery, teaching me that determination goes a long way. I have met so many people, teammates and coaches that grew very close to my heart and have influenced my life in a positive manner. ”

Filley, an all-Hoosier North Athletic Conference shortstop, says that the 2019 softball team has been the most successful team she has played on collectively.

“Overall, I have performed to the best of my abilities,” explained Filley. “Although I strive to better myself and the team, I am also satisfied with our progress up to this point. This team is flexible and competitive. Each player started in a certain role at the beginning of the season, but many have changed and developed, due to injuries and setbacks.

“I am proud of our girls and how far they have each worked individually to better themselves and impact the team in a positive way, no matter what it took,” continued Filley.  “Many of times, some of my team mates have been thrown around into multiple different positions in a game, some they have never played before. Rather than letting the changes set a negative tone, they took it to heart, and did what needed to be done to have a successful outcome, they used it as a learning experience. Playing with these girls has taught me new things about the game and what it means to be a friend. I will miss this game and this team immensely.”

According to Filley, being selected athlete of the month is about more than being a good player.

“Being nominated by my coach as Female Athlete of the Month means to me that I have done my job as an athlete,” said Filley.  “Being an athlete is more than just being a “good player” but a hard worker, a good listener, and a good teammate. These three traits have been important to me all my life, but especially when it comes to this team. The fact that I was recognized by these traits from my coach, my team mates, and the LaVille community, is a humbling experience that I am immensely grateful for.”

Yoder, who just qualified for the IHSAA Kokomo Track Regional in the 400m dash, says the season has gone well so far

“This track season has been the best season for me and the team as a whole,” said Yoder.  “I just qualified for regional’s for the 400M with a personal record of 50.99 which is a second off the school record which is a big goal of mine. For the team we have broke and re-broke the school record for the 4×400 and 4×100 races. The team as a whole has also won big meets such as the John Glenn Invitational, and Hoosier North Athletic Conference, as well as doing good in bigger meets such as Concord Relays, with the deficit of being such as small school.”

Yoder says that track workouts are not always the same.

“Well workouts change throughout the year to make sure that the individual is the fastest that they can be at the end of the year,” said Yoder.  “But a normal hard practice would be to run 6 200m or 4-5 400m 5- 300m, with a goal time to get every time. But then we have pre-meet practice where we focus more on technical work such as block starts, running form, hand-offs for relays. Which is much more difficult then people think.

Yoder is also fortunate that both the 4×100 and 4×400 relay team has advanced to the track regional.

“Yes I am on both the 4×100 and 4x400m relay, I run the third leg of both relays,” explained Yoder.  “Both teams are special since no matter where we are on the track, during the race, everyone in the relays never give up no matter what place we are in at the time, and we always finish strong.

“Me going to the next level, well say the next level is college, is a dream of  mine, ever since my first year of high school track I have known that I would love to go to college and run,” continued Yoder.  “I have actually just started the recruitment process and I am going to be talking to a recruiting agent sometime this week. She said that my grades and time in the 400m are good enough to get recruited. Also I definitely see me going to state for the 400m dash whether that is this year or next year.

Yoder was a transfer from the South Bend School system and explains, it wasn’t easy at first.

“Moving from South Bend schools to LaVille, wasn’t easy for me,” concluded Yoder.  “I didn’t know anybody and I was a very shy kid. But then when I started my high school sports career I started to get noticed, especially when I tore my ACL my freshman year of football. Which was also a heart-breaker because I never thought I would be a strong or as fast as I used to be. But then when I did wrestling the next year I started to break out of my shell and make more friends, then track came along and I was pretty good at it so I made even more friends out of that. So athletics mean a lot to me. They helped me socially and they help me stay motivated to do good in school.”