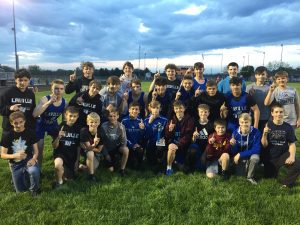 CULVER, IN. – For the first time ever, both the LaVille Junior High boys and girls track team have won the Hoosier North Athletic Conference championships.

“Field events have been strong for us all year,” said coach Isaac Eash.  “We rely on getting a good jump at the beginning of  the meet with points in the field events.

“Garrett Wagoner PR’d, Noah Richhart got it done in shot put, and we knew that Collin Allen and Levi would do well,” continued Eash.  “We knew we had to score some points in field events because we knew North Judson would score some points in the running events.  So, we tried to score as many points as possible.”

Big running event points came from Owen Smith in the sprints, Joe Cruz in the 110 hurdles, and a couple relay teams.

“Owen Smith has been injured the last couple of meets,” said Eash.  “He did not have a full meet. I talked to him before the meet and we talked about the strategy for the long jump. Then he ran 100, ran 200 and was hurting  after that. He put in a ton of effort. I’m real proud of him.”

Lincoln Hulsey, the 2019 HNAC pole vault champion, was a diamond in the rough for LaVille.

“We didn’t know where Lincoln would fit in to start the season,” said Eash.  “We thought, hey, one of our assistant coaches has the same last name.  Maybe he can pole vault. We tossed him pole vault and he’s done well.

“I talked to Lincoln before the meet, I told him we need the top spot and he got over 8-foot to win.  He is our secret weapon at home.”

Eash has been proud of the effort his squad has given this eason.

“They are a hard-working group of kids,” said Eash.  “On the bus ride there, they were talking about winning conference.  We knew that North Judson was tough in running events, we need the field event points and pick up some places in the running events. They work through injuries, they don’t care if they aren’t in the event they want, they just want to score points.” 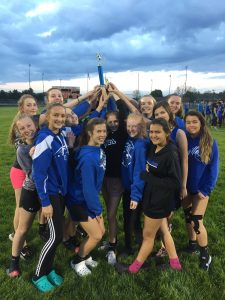 “At the beginning of the season, we didn’t know what we had with this team,” said Eash. “We beat Westville in the first meet. New Prairie beat us pretty good, but then all of a sudden we won a couple. (Coach) Jason (Breden) came up to me and said hey, I think we got a real shot to win girls conference too.

“Jason likes mixing and matching to get the kids in the right spot,” said Eash. “We had a 10 point lead and Pioneer won the last two events.  We were up by seven points and winning the 4 x 400 sealed the deal.

“We had some real nice performances,” continued Eash.  “I give these girls a lot of credit.  They ran strong and got us crucial points where we needed them.”