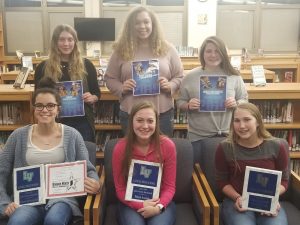 The varsity finished the season with a 5-18 overall record and 1-6 in the Hoosier North Athletic Conference.

“This season was one of ups and downs and one of learning,” said LaVille coach Corey Duncan.  “Our staff became better “teachers” of the game because of it.

“I think the two Bremen games show our growth the best,” continued Duncan.  “The third game of the season the Lions came in and gave us a good beating.  The second time I felt we gave the Lions a scare.  Defensively we grew so much.  Offensively there is still a lot of work to be done.  There is a lot of potential coming back next season.”

“It’s always tough losing your seniors…. your experience,” explained Duncan of the Class of 2019.  “Kelsey and Julia did a lot of teaching right along with the coaching staff.  For being with me for four years, and in Kelsey’s case five years, they knew the expectations and what we needed both defensively and offensively.  I appreciated what they brought to the team this season.  Hannah (Filley) was an added bonus to the team.  Her intensity made us more intense as a group when she was on the floor.  I just wish she had more time with us!  I think Coach Cox summed up Trinity (Strange) the best.  He said that she learned some life lessons and maybe she wasn’t where she needed to be, but she never quit.  That’s a great quality to take with you in life!”

“I look for some big things from our returners next year,” said Duncan.  “The seniors, Trynitie (Cox) and Natalie (Gonzalez), will need to improve their offensive game this summer.  (Lauren) Dove and (MaKenna) Tribbey will work hard to get better.  We also need their offensive production to increase.  Those four need to take a leadership role and help the newcomers where they need to be!  They also need to get their teammates to workouts and scrimmages this summer so we can continue improving.”

According to Duncan, potential Newcomers could be Rebekah Beehler, Allison Giles, Allison Medors, Faith Rock, Kylie Gorka, Madelyn Fuchs, and Kassi Watts. “They look to play the minutes left behind from our seniors.  We are looking for a point guard to replace Kelsey.  I will be anxious to see who will put in the time to take over that critical position.  I look forward to next year and what we have the potential to do on the court next season.  This group has a lot of team chemistry and that is one of the attributes of success!”