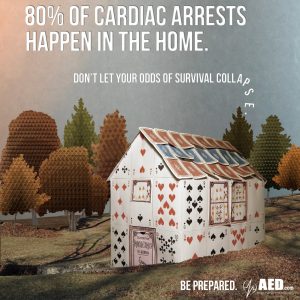 LAKEVILLE, IN. – Most sudden cardiac deaths are caused by abnormal heart rhythms called arrhythmias. The most common life-threatening arrhythmia is ventricular fibrillation, which is an erratic, disorganized firing of impulses from the ventricles (the heart’s lower chambers).

Such was the case for Zac Mago, a John Glenn student, during the summer of 2018.  Mago was a student at Glenn and unexpectedly passed away on July 5, 2018, while taking a nap.  Zac died from Sudden Cardiac Arrest attributed to an enlarged heart.  There is nothing natural about a healthy 17-year-old, one week shy of his 18th birthday dying.  To carry on Zach’s memory, the Zac Mago Foundation was founded.

To shed more light on Sudden Cardiac Arrest and hopefully prevent future SCA from occurring in young people, the Mago Foundation has partnered with mCORE (Mobile Cardiac Overview and Risk Evaluation) to make screenings available and affordable for conditions that could lead to Sudden Cardiac Arrest.

The Mago Foundation and mCORE will be screening LaVille High School senior athletes on May 1.  The cost per screening is $75 and Zach’s Foundation will pay $55.  The Mago Foundation is asking parents to pay a small copay of $20.  A scholarship is available for those who can’t afford the $20 co-pay.

Parents and students would sign up directly on the mCore HIPPA compliant website.  This screening includes both an EKG and limited Echocardiogram.  They have less than a 1% false positive rate.  The reason for this is they do both tests, not just an EKG, which does tend to have a higher rate of false positive.

Each year, EMS treats nearly 300,000 people who suffer cardiac arrest outside the hospital. More than 92 percent of cardiac arrest victims don’t survive to be discharged from the hospital. In cities where defibrillation is provided within 5 to 7 minutes, the survival rate is as high as 30–45 percent.

There are more than 356,000 out-of-hospital cardiac arrests (OHCA)[1] annually in the U.S.; nearly 90% of them fatal, according to the American Heart Association’s newly released Heart Disease and Stroke Statistics – 2018 Update. According to the report, the annual incidence of EMS-assessed non-traumatic[2] OHCA in people of any age is estimated to be 356,461.

There are a number of ongoing challenges to understanding the epidemiology of cardiac arrest in the U.S. Despite being a leading cause of death, there are currently no nationwide standards for surveillance to monitor the incidence and outcomes of cardiac arrest. Thus, registries and clinical trials are used to provide best estimates.[3]

Following are highlights from the report:

LaVille Jr.-Sr. High School currently has two AEDs (Automated External Defibrillators) inside the building – one in the athletic area and one in the front hallway across from the main office.

When asked about the importance of AEDs in the school, LaVille Athletic Trainer Gary Hall said: “They are extremely important. Without them you are waiting on EMS or someone that knows how to do CPR.  If you do not know how to use an AED, the AED pretty much talking you through each step. It tells you what to do. I’m so thankful we have them.

When Hall learned that the Mago Foundation was teaming with mCORE, Hall said:  “I think this is fantastic. It is needed. Hopefully we can find kids with issues they didn’t know about and get further testing. Without it, we don’t know if they would have an issue. It is so nice! I don’t know how many kids will sign up, but I know my daughter is going to do it.”