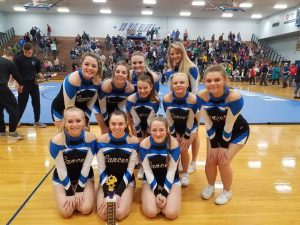 In the large school varsity, Hanover Central came up with 261.5 points for first.  Triton was second, and South Central third. 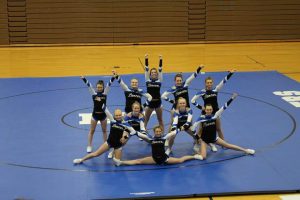 This the first time that LaVille has hosted a high school cheer competition and the cheer members were excited for the opportunity.

“I think it was really cool for us to host this event,” said LaVille cheer member Allyson Maenhout.  “It was great to have other schools come and compete.”

Competition cheer is different than cheering from the sidelines and supporting basketball or football. 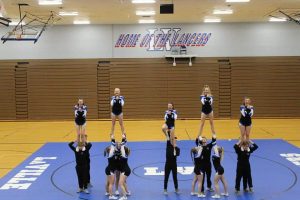 “I thought we did pretty good,” Maenhout continued.  “We were a little nervous. But we have worked hard, practiced hard and long.  Once we got onto he mat, we did really well as a team.

Teammate Kelsey Anders also thought it was a great experience.

“We’ve never really done anything like this before,” said Anders.  “I loved it.  It was amazing. We got second and that was really good.”

“I think we could have done a little better with tighter motions, but overall I thought we did really well,” continued Anders.  “It was a little different cheering in front of the judges, but I don’t think the crowd really bothered us.”

LaVille was the only entry in the co-ed division.

“I thought we did really good,” said Maenhout of the co-ed portion.  “They boys did amazing with lifting and getting to the places on time.”

According to Anders, “That was our strongest routine. It is amazing that we have boys that are willing to cheer with us. That really helped us out.” 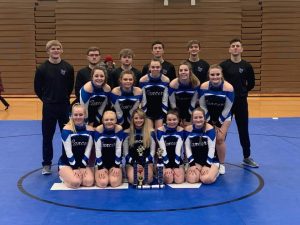 Both Anders and Maenhout hope the competition will continue moving forward.

“It was exciting to host the first one,” said Maenhout.  “I hope this becomes an annual thing.”

Anders had fun, but also felt that the competition may have helped others learn more about cheer.

“It was of fun,” concluded Anders.  “Normally we are cheering on the sideline. But everyone was just watching us. I think that those that came understand what cheerleading is all about.”

LaVille Athletic Director Will Hostrawser expects for the event to grow moving forward.

“This was the first cheer competition we have hosted,” said Hostrawser.  “In speaking with (LaVille coach) Kelsey (Miller), we decided we wanted to provide the opportunity for our cheer squad to showcase their skills.  A cheer squad always supports other groups and adds to the atmosphere of our athletic functions; however, they never had the opportunity to compete and showcase their own skill set in this type of environment.  So we looked at the calendar and created an event for them to do just that.

According to Hostrawser, there were eight teams that participated. “They all really appreciated the opportunity,” Hostrawser said of the feedback.  “All the squads did a fantastic job as well.”

Hostrawser did admit that this was something new for not only him, but also the school.

“It was really a venture into the great unknown as I have never attended an event like this much less host one,” explained Hostrawser.  “Kelsey and I put together a structure, found 3 judges, crossed our fingers and tried it out.  I really think this event will grow in the next couple years as there is nothing else out there like it.”

Miller was very excited to host the cheer competition and looks forward to the opportunity moving forward.

“I was very grateful for the opportunity to host a cheer competition at LaVille,” said Miller.  “I believe this was a first time event for our school to host, as well as our team’s first time to compete in over a decade.

“A cheer competition in the future is something LaVille Cheer is definitely interested in doing,” continued Miller.  “This is such a great way to showcase new skills and bring focus on details of our performance. The competition was well-received and has a likely chance to grow in teams that participate. With each new experience comes an opportunity to improve and grow the next, and that is exactly what we’ll plan to do.”