He spent the last year working to become a better wrestler.  He worked from being more of a head-on style wrestler to learning angles and better technique.

All that hard work helped Cartwright advance from the East Chicago Semi-State ticket round to the IHSAA state finals at Bankers Life Fieldhouse in Indianapolis.

In the end, Cartwright’s bid for a state title came up one-point short in a 3-2 loss to Brownsburg’s Dorian Keys, earning him a state runner-up finish. 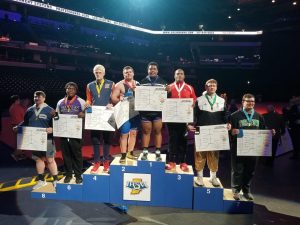 Cartwright finished 32-1 overall.  During the season, he claimed Hoosier North Athletic Conference championship honors, along with sectional, regional, and semi-state titles for his hard work over the last year.  And ultimately, a state runner-up medal.

“I wish there were words to explain how proud and amazed at Alex’s accomplishments over his wrestling career,” said LaVille coach Sean Webb.  “Definitely one for the record books.  He did it in the most respectable way possible.

“I am glad to be a witness of it and hope more follow him,” continued Webb.  “He gets his name on his own brick up on the wall in the wrestling room forever, and only the third wrestler in history to place at the state finals.” 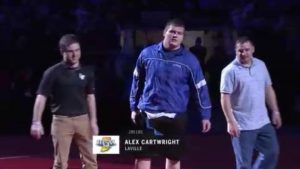 Cartwright successfully won Friday’s first round match with a pin in 1-minute, 20-seconds.  A second pin in Saturday’s quarterfinal got him to the semifinals opposite Indiana’s #1-ranked heavyweight wrestler Jamichael Watts of North Central.

It was historic match.  A match that Cartwright will not soon forget.

It took triple overtime – eight minutes of wrestling – before Cartwright was able to pick up a hard-earned 2-1 victory.

“We were all holding our breath when Alex rolled on to his back,” recalled Webb of the match against Watts. “But Alex’s determination helped him get out.  We were going crazy after he was able to escape and seal the match.  It was an incredible match.” 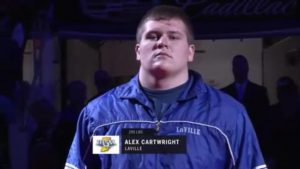 Heading into the semifinal match, Watts and Cartwright were the only unbeaten wrestlers remaining in the heavyweight class. Watts was the No. 1-ranked heavyweight in Indiana, according to the wrestling website, IndianaMat. Cartwright wrestled his way to the #5 spot in the state.

When the match began, Cartwright clearly had a game plan. He shot repeatedly, only to have Watts block his moves. A couple times, Cartwright almost gave up a takedown, but was able to use his quickness and show the angles he had learned to escape.

It was tied 1-all at the end of regulation, with each wrestler scoring an escape. The first 1-minute overtime session didn’t change things. In the third overtime, Cartwright was able to pull away with 15 seconds to go to secure the winning point and a spot in the state championship match.

“It really was the best match of the whole tournament,” said Cartwright.  “It was pretty exciting match. We wrestled the whole eight minutes. We were at each other the whole match. It felt good to get that win considering two years ago I lost in the blood round at semi-state in overtime. It was nice to win the overtime match in the state finals.  That win felt pretty good.” 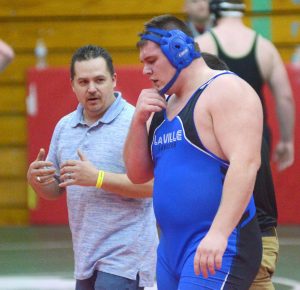 In the state championship match against Keys, points were hard to come by.  Each wrestler had few chances to score as Keys and Cartwright were tied up collar-and-elbow.

Stalling could have been called on Cartwright’s opponent several times.

“He really did hang on my head, and he didn’t get called, but that’s wrestling,” said Cartwright.

After giving up a takedown early in the first period, Cartwright was unable to generate any offense against the Brownsburg junior, who wrapped his arm around Cartwright’s neck.

“Alex made one mistake in the beginning by trying to keep going after that takedown,” said Webb of the exchange.  “Instead of bailing out and waiting for the next opportunity.  Alex was not able to pass his inside elbow defense.

“Alex did the best he could do but were not able to force a second stalling call,” continued Webb.  It’s a tough way to lose, but one mistake is maybe all that it will take sometimes.” 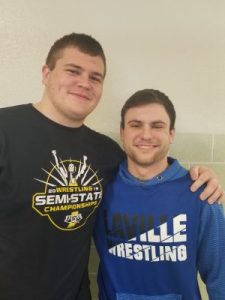 “I got cocky in the first period,” admitted Cartwright  “I took a bad shot kept on being aggressive and he got behind me.  It was kind of a stall match from that point. I kept on pushing the pace and he kept on hanging on my head. It was not an eventful match.’

Despite the ending, Cartwright was proud of his work the last year and his run in the state tournament.

“There was a lot of progression from beginning to end,” said Cartwright.  “As the season progressed I just kept on working harder and harder.

“We haven’t had anyone place at state for 20 years,” continued Cartwright.  “It is a blessing to be able to give those kids in middle school and elementary something to look up.  It’s all pure hard work and determination. I want to give thanks to coach Bottorff, coach Webb, coach McCullough, Coach Felke, and off-season coach Kevin English for helping to evolving me into the man I am today.  They helped me with the state run that I had. I couldn’t have done it without them.”

“Coming in, nobody knew how good Alex was except for his coaches, teammates, and friends from his summer wrestling.  Nobody else had the chance to see him on the level cause he faced the eventual state winner in the semi-state ticket round.

“There must have been a bunch of coaches and wrestlers who came up to me and asked where LaVille was,” continued the LaVille coach. “We all wanted to represent the smaller schools that don’t get these chances too often.  We are tremendously proud of Alex, the way he acted throughout the run with determination, respect, and competitive passion.  He had, in may people’s opinion, the most exciting match of the state tournament.  I hope they remember that one for a long time.  I’m very happy for Alex.”