LAKEVILLE, IN. – After nominations from winter head coaches, and an open vote on www.lavilleathletics.com, cheer crew member Meghan Shreve and basketball player Jared Beehler have been selected January Athlete of the Month.

Shreve won 84% of the vote as compared to 16% for basketball player Julia Hall.

Shreve was not only surprised of her nomination, but that she was the monthly recipient. 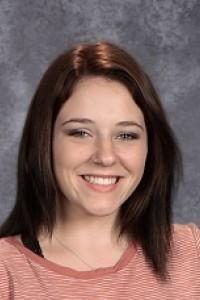 “I was very surprised when I found out I was nominated and even more surprised when I won,” said Shreve.  “It’s a huge honor and really makes me want to try harder at practice and during games.

“This cheer season is going great so far!” continued Shreve.  “The season started off a little rocky, but we’ve all grown so much individually and as a team. We are able to accomplish more and more each day and are really focusing on competition.

Shreve also indicated that contrary to opinion, cheer is challenging.

“Cheer is definitely not an easy sport and requires that everybody stays focused and always give your best at whatever spot you’re put in even if it’s not your favorite,” concluded Shreve.  “My position is typically a base, but I’ve also flown and back spotted. It’s much more helpful to be a versatile player, it opens up so many more possibilities for stunts if you can be moved around to any position.” 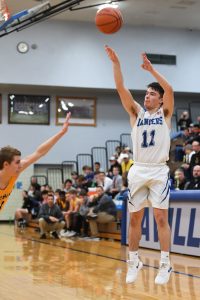 Beehler is currently Indiana’s third-best IHSAA 3-point shooter.  Beehler leads LaVille in 3-point shots made.  He is also the second-leading scorer at 13.5 points per game.

“The basketball season has gone very well so far, as a team we have been playing very well together,” said Beehler.  “Personally I feel like I am improving and having a lot of fun playing.”

According to Beehler, he enjoys playing for coach Edison and feels like he has improved his game.

“My teammates and my love for the game of basketball is what motivates me to play hard during every practice and game,” said Beehler.  “It means a lot to be nominated and selected for this award especially with having so many other great male athletes throughout the school.

“It is great playing for coach Edison because he has a lot of knowledge and experience with the game of basketball so I really learn a lot in practice,” said the senior shooting guard.  “Something that I have learned to help improve my game is to never dwell on previous plays if you make a mistake, always keep your head up and usually good things will happen.”