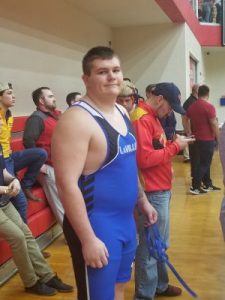 INDIANAPOLIS, IN. – LaVille senior Alex Cartwright has worked long and hard to get the opportunity to wrestle for an Indiana High School Athletic Association state wrestling championship.

The road to that dream begins Friday at Bankers Life Fieldhouse as 16 wrestlers in the heavyweight class prepare for the ultimate goal – A State Championship!

Cartwright takes his 29-0 record into Friday’s first round against Samuel Littlejohn of Perry Meridian High School.  The opening round is set to begin at 6 p.m. and generally takes approximately three hours to complete.  From there Cartwright could move on to the quarterfinals Saturday, followed by the semifinals, and, ultimately the state championship match sometime late Saturday night under the spot light.

“Having a wrestler at the State Finals is a blessing and is special whenever it happens,” said LaVille coach Sean Webb.  “LaVille having one creates excitement, buzz, and any other word you could think of that means special. It is a testament to LaVille’s wrestling program and motivates younger wrestlers to strive towards to their own goals. I am just happy I am able to be a part of it.”

A year ago, Cartwright won his first match at the East Chicago Semi-State before losing in what the senior labeled the “blood round”

“It all started when I lost in the second round (at semi-state),” recalled Cartwright after the 2018 semi-state quarterfinal round loss.  “I had a coach from the Elite Wrestling Club help pave my way through. We worked on technique and pushing the pace more. 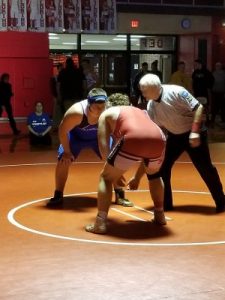 “Technique-wise, last year I was more of a head-on wrestler,” continued Cartwright. “I kind of hit a brick wall against head-on wrestlers.  I’ve learned how to take angles and really set more things up.  I am better to adapting at more wrestling styles and that paved the way this year by being able to adapt to each wrestler and each match because not everyone wrestles the same.”

So where did Cartwright get his motivation over the last year.

Cartwright knows that he is from a small school, but the senior embraces the small-school position.

“This does mean a lot,” says Cartwright.  “We are here from a small-school. Small schools don’t get a lot of love compared to the bigger schools.  It shows what those smaller schools can do and how they can compete against bigger schools.”

It really boils down to learning along the way, getting better each year, and, ultimately the motivation of an opportunity to be a state champion. 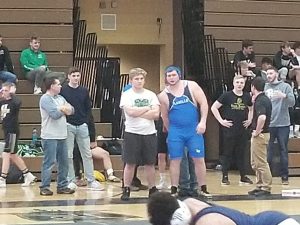 “This is something I wanted since when I was a freshman and on JV,” said Cartwright.  “I took what opportunity was given to me this last year and putting to my advantage.

“The goal is to be a state champ,” continued Cartwright.  “That’s a big goal.  But wrestling is about taking one match at a time.  Get through Friday night and get through the quarterfinals.  I don’t want to get ahead of myself and overlook anyone.”

According to Webb, Cartwright’ journey was slow to start the season.

“At the beginning of the year, Alex had trouble making weight,” said Webb.  “He put in time after practices to increase his stamina and cardio. His improvement started over the summer in the off-season going to folk style tournaments. He has improved his takedown finishes and his technique. He understands how to mentally prepare for each individual match. That is the biggest change we have seen from Alex throughout the year.”

So what is it like to be a wrestler at the state finals?

“I personally can not speak to what it is like to be wrestling in the state finals, but even sitting in the stands, you feel the energy in the room that is like no other feeling,” explained Webb.  “To make it all the way through, Alex will have to wrestle with controlled aggression, s strong mental determination, and fundamentals. Nobody has anything to lose at this point in the season. You have to be able to enjoy the moment, control your nerves as best you can on the mat, and wrestle fundamentally sound.”

Even though Cartwright had a slow start to the season, Webb had a feeling something was brewing.

“Right at the beginning of the year, I knew Alex was on a mission to get to Indianapolis,” recalled Webb. “We always break down the schedule into three parts from before breaks for the holidays, when school come back into session, and then the playoffs. Once you know its playoffs, its go time. Once it was that time, he took it one match at a time ever since.”

According to Webb, the coach is, “just happy to be apart of this run. It means all the hard work we have done in the wrestling room has helped. We have kept preaching to get better every single day. I am glad to share this excitement with Alex, Alex’s family, the wrestling team, and everybody who has helped out the program. Wrestling coaches don’t call timeouts on the mat to draw up a play, even though we are screaming at the top of our lungs to help. I give all the credit to the wrestler and enjoy the moment. Having a wrestler with those accolades is incredibly impressive. I am sure once the season is over we can look back on that and really enjoy what he accomplished.”

Two hundred twenty-four wrestlers in all, 16 in each of the 14 weight classes, will begin first round competition on Friday at 6 p.m. First-round winners will return to wrestle on Saturday with quarterfinal action beginning at 9:30 a.m. and semifinal matches to follow after all weight classes have concluded. Consolation bouts begin at 5 pm and championship matches under the spotlight are scheduled for 7:30 p.m.

Team scoring will begin with Friday night’s preliminary matches. Scoring will go to eight places and, additionally, two (2) advancement points will be awarded per match for a championship bracket victory while one (1) point is earned for advancement in the consolation bracket.

One hundred four (104) schools will be represented at this weekend’s state finals with Brownsburg and Evansville Mater Dei leading the way with nine qualifiers each followed by Avon with seven. Defending state champion Indianapolis Cathedral and Roncalli led the state with four semi-state champions with Avon, Jimtown and Mater Dei tallying three each. A total of 305 schools and 5,093 were entered into this year’s state tournament at the sectional level.

UNDEFEATED WRESTLERS IN THE FIELD (13)