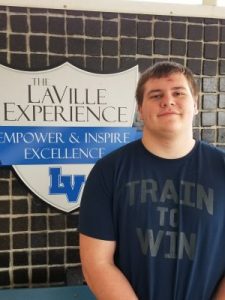 Cartwright became the ninth wrestler in school history to earn a regional title.

The Lancer senior pinned Oscar Herrera of South Bend Washington in 15-seconds to win the first round match.  In the semifinal, Cartwright pinned Hagaen Slusher of Wawasee in 48-seconds to set up a regional title match with Penn’s Yehezquel Devault.

And it was a fantastic match!

“There were a few times each wrestler had a better position on the other and was able to make an offensive move,” explained LaVille coach Sean Webb of the regional championship match.  “Alex did an amazing job at defending and countering Devault’s hand fighting, as well as seeing his opportunities to take advantage. The change in the match was a crucial mistake by Devault putting in a full Nelson and tying the match up 1-1. Alex was able to get his escape to lead the match 2-1 by clearing his hips away as quickly as possible with less than 1 minute left.”

That escape in the final minute helped Cartwright earn the regional

“Being Regional champ is an incredible accomplishment considering he wrestled the top-ranked wrestler in the state according to indianaMat in the 285 weight class,” continued Webb.  “Alex had a great first and second period. He has put in the time and effort to find the energy to finish off the match in the 3rd. I am extremely happy for him.”

Both Webb and Cartwright knew facing the #1-ranked wrestler in the 285-pound in Indiana would be a great test.  A measuring stick, if you will.

“Going into the match, we both knew this would go three periods and each period would be a battle,” said Webb.  “We were focusing on Alex’s lower body and upper body fundamentals like stance and getting inside control. Alex was able to strategize how he could dictate the match.  We were able to enjoy the accomplishment over the weekend and got back to work on Monday. We needed to work on Alex’s conditioning and finishing his takedowns if we want to make it to state.”

Admission will be $8 (Final session only) or $10 (Season ticket).   The top four place winners in each weight class advance to the state finals.