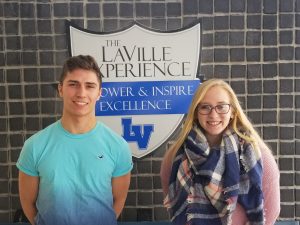 LAKEVILLE, IN. – After nominations from winter head coaches, and an open vote on www.lavilleathletics.com, cheer crew member Charlet Kapke and wrestler Nick Felke have been selected December Athlete of the Month.

Kapke won 64% of the vote as compared to 36% for basketball player Kelsey Aschenbrenner.

Cheer Coach Kelsey Miller nominated Kapke because, “she has a positive attitude and always gives 100%. She sets a good example for her teammates. Normally she has lifted her teammates, but this season we are seeing her fly too. She is willing to learn new skills and she does a fantastic job at all of them!”

Kapke said she was never considered a flyer until this year. 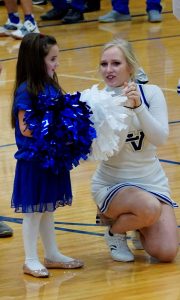 “The cheer season is going really good so far,” said Kapke.  “We were able to receive the addition of male cheerleaders this year, and that really allowed us to further develop as a team. With more
people and more strength, we have been able to learn and do more stunts than what we have in
the past. These boys, being lifters, have also made it to where we needed more flyers, making
people who normally lift, actually becoming flyers. I was actually taught to fly this year, for the
first time in my 12 years of cheerleading and that really caused me to grow as a teammate, and
a cheerleader. Also this year, for the first time since I’ve been at LaVille, the team and I are
looking forward to competing in a competition hear soon.”

Each month coaches are asked for nominations.  Those nominations go beyond stats.  They are also considered because of willingness to be a team player, attitude, and leadership.

“For me to have been nominated by my coach and then selected as the female athlete, I feel
very honored,” explained Kapke.  “There are plenty of other female athletes who are deserving of this award, and for me to be among one of them, it makes me feel as if I am doing something right, and am making a difference in my team.

“Cheer, although everyone does have a role like in other sports, is a little different,” continued Kapke.  “By us not having to base what we do on the other team, we have to be able to come up with and make
many new cheers and stunts on our own in order to stay interesting. This causes every person
to have to be willing to try new spots for the purposes of that specific cheer.”

Kapke was willing to step outside her comfort zone and become another flyer to help highlight the specific cheer.

“I am normally a base, however, this year in order to help my team, I had to step out of my comfort zone and fly for some of the cheers,” concluded Kapke.  “For being a base for so long, I knew what the flyers needed to do to make the stunt work, but by then being put in that position, I was able to see that it is a lot easier said than done. Each stunt that we do, everyone involved — the flyer, normally two bases, the back
spot, and sometimes even a front spot — must have a lot of trust in each other. The bases must
do all they can to make sure the flyer goes up safe and does not fall, and must trust the flyer
won’t kick them coming down and that the backspot with be there to help catch her. The flyer
must be willing to fly confidently and be very trusting in everyone below her knowing very well
that she could fall and get seriously hurt. When we stunt, no matter what position one does, we all must be perfectly in time with one another, preform our role the best we can, and trust that
everyone will do the same. There are so many things that can go wrong in even the simplest
stunt, but our team is almost always able to make our stunts work because of our teamwork.”

LaVille Wrestling coach Sean Webb nominated Felke because;  “he has shown leadership and unselfishness in the wrestling room by helping younger wrestlers with certain moves and technique. He has also been a vocal leader on the bench during our meets.”

“Wrestling season has gone by way too fast and I will miss wrestling, my record for this season is 28-3,” said Felke.  “The wresting team is a little smaller this year than what it has been in the past, but we are doing the best to our abilities to keep going.”

Felke is also proud to have been selected the male Athlete of the Month.

“Being nominated to become Athlete of the Month is something to be proud of,” said Felke.  “It means that you have earned a lot of respect from your peers and even from your coaches.”

Though Felke has wrestled in a couple other weight classes during the season, he pretty much sticks with 132.

“The weight class that I am in is 132 lbs.,” Felke concluded.  “In wrestling we do a lot of conditioning to keep us in shape. We also stretch all the time so we don’t pull any muscles, and hurt ourselves. I practice with everyone inside of the wrestling room.”