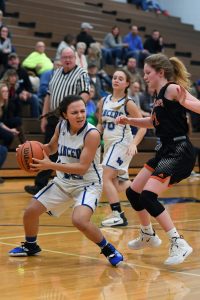 CULVER, IN. – The LaVille girl’s basketball team traveled to Culver Community for the regular season finale.  The Lancers had several opportunities, including chances at the free throw line, before falling to the host Cavs, 35-30, in Hoosier North Athletic Conference action.

The win snapped a five-game winning streak by LaVille.

The two HNAC squads battle to a 9-9 tie at the end of one quarter before Culver took momentum a 19-14 lead at halftime.  Culver’s Madison Shedrow led the way with 11 first-half points and was a point of emphasis for the Lancers in the final 16 minutes.

LaVille used the quickness of guard Natalie Gonzalez to neutralize Shedrow in the second half as the Lancers rallied to tie the score at 26-26 at the end of the third period. 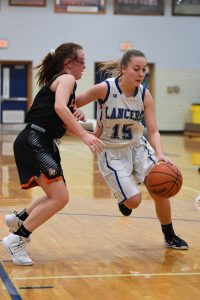 “I thought Nat did a great job and held Shedrow scoreless in the second half,” said LaVille coach Corey Duncan.  “That is something we want to try against Bremen.  We do a lot of things well, we just can’t seem to put it all together.”

Kelsey Aschenbrenner canned a pair of 3-pointers to lead the team with 10 points. Gonzalez was added nine points as the guards stepped up to spark the rally.

As the Lancers took the ball to basket, Culver was whistled for 18 fouls overall.  LaVille struggled from the free throw line, hitting just 6-of-20, to shift momentum down the stretch and lead the Cavaliers to the HNAC victory.

LaVille finished the regular season at 5-17 and 1-6 in the HNAC.  The Lancers open Class 2A Central Noble Sectional play against neighbor Bremen in the first round of the IHSAA state tournament.  That game is scheduled for January 29 at 7:30 p.m. at Central Noble High School.  The Lions took the first encounter with LaVille, 60-26, on November 6.

Culver improved to 10-12 overall and 2-5 in the HNAC. The Cavaliers will face LaCrosse on January 30 at the Class 1A Oregon-Davis Sectional.  That game is set to tip at 5:30 p.m. central time. The Tigers got the best of the Cavaliers on November 6, 58-30.