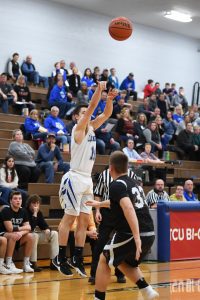 CULVER, IN. – The LaVille Basketball team get back in the Hoosier North Athletic Conference fray January 25 at Culver Community.  The Lancers met the Cavaliers in the first round of the TCU Bi-County Basketball Tournament on January 15.  LaVille came away with a 86-41 non-conference victory.

This time, the Lancers look to keep pace with HNAC leader Winamac.  The Warriors are a half-game ahead of LaVille in the HNAC standings.  Winamac is at 4-1 in loop play, while the Lancers and Knox are 3-1.

The JV game tips at 6 p.m., with the varsity to follow.

“Our defensive pressure really got to the Cavs,” said LaVille coach Michael Edison of his 22nd-best defensive team in the state.  “We were able to be consistent with our pressure for much of the game and that eventually wore them down.”

Jared Beehler led all scorers with 19 points. Cox had 16 and Luke Beehler 13 back on January 15.