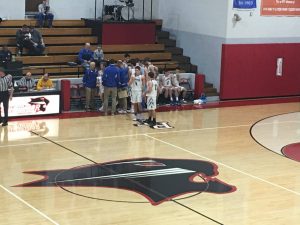 INDIANAPOLIS, IN. – After nearly pulling off a remarkable come-from-behind victory against Class 2A #12 Indianapolis Howe, Class 2A #1 LaVille needed to step up and play Hammond Clark.  It was going to be the second game in less than 2 1/2 hour span in the Park Tudor Shootout.

Coach Michael Edison may just have gotten a few answers to questions about his Lancers as the visitors from Lakeville played solid defense, spread the scoring around and regrouped to the tune of 71-18 over an outmatched Hammond Clark club.

“I was proud of the way our guys came out in the second game against Hammond Clark,” said LaVille coach Michael Edison.  “They were ready to play in less than 2 1/2 hours after finishing an emotionally draining game (against Indianapolis Howe).”

LaVille got things rolling with a solid shooting effort, hitting four 3-pointers en route to a 20-6 lead at the end of eight minutes.  Rilye Cox led the way with nine of game-high 16 points in the first period.  Jared Beehler landed a couple of deep treys and Luke Beehler picked up a couple of buckets along the way.

The Lancers put up 17 more points to open a 37-12 halftime bulge.  Connor Wieczorek, Riley Wagoner, Ayden Doyle, along with Jared Beeler and Cox helped put five players in the LaVille scoring column as the Lancers built a solid cushion.

“We had a lot of players step up their game in the second game and every single person contributed in a positive way,” said Edison.

It was much of the same in the second half, as coach Edison went to the bench to give quality minutes that resulted in every LaVille player that played reached the scoring column.  The Lancers were able to put up 31 points off the bench.  Bobby Good continued the LaVille offensive balance with seven points off the bench.  Ayden Doyle and Isaiah Herbster added six points each, and Leyton Czarnecki and Andrew Dill chipped in with five points each.  Wieczorek and Jared Beehler led the LaVille offense with eight points each.

LaVille improved to 9-1 overall and will return to Hoosier North Athletic Conference action January 5.  The JV will tip at 6:30 p.m., with the varsity to follow.  The Lancers currently lead the HNAC with a 2-0 record.