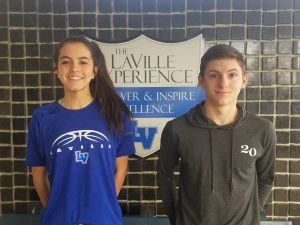 LAKVILLE, IN. – After nominations from winter head coaches, and an open vote on www.lavilleathletics.com, LaVille basketball player Trynitie Cox and LaVille wrestler Levi Holderman have been selected November Athlete of the Month.

Cox, a junior, is a 6-foot-1 forward on the LaVille Lady Hoops squad for Coach Corey Duncan.

“This season has gone pretty good so far,” said Cox.  “There are some things the team is struggling with, but we are doing good at trying to fix those things.  We do have a young team, but the team works really well together.

“Personally I am doing well,” continued Cox.  “There are some games I struggle with because the (opposing) team tries to stop me but most games I try my best to do what I can to help the team.” 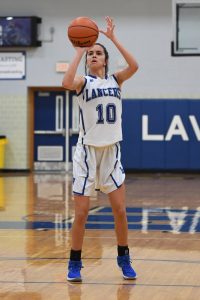 Cox had five double-doubles in the month of November and currently leads LaVille 11.7 rebounds per game and a 8.8 scoring average. 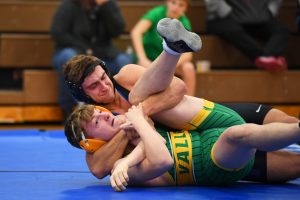 “The season is going pretty good,” said Holderman.  “Our team has its ups and it’s downs but we are managing through the season. Personally this season I have learned a lot and plan to keep learning and improving through the rest of the season.”

Holderman just finished 3-2 in his five matches at the Mike Bottorff Classic, then picked up a crucial fall in the second period to help the Lancers defeat Westview, 36-24, right before Christmas vacation.

“As our team prepares for a match we really hammer down on the moves we need to work on so they are fresh in our minds when the matches comes around.”

Holderman appreciate the help and motivation from the coaches and his Lancer teammates.

“I wouldn’t have made it as far as I have in the season without the help of my couches and the rest of the teams support,” said Holderman.  “I just want to say thank you to all of them.”