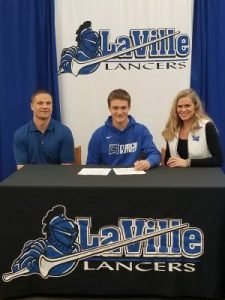 FORT WAYNE, IN. – LaVille senior Luke Beehler has signed a letter of intent to continue his academic and athletic career at Purdue Fort Wayne.  Beehler will become a member of PFW Mastodon men’s track and field team.

“I am very excited about Luke being a part of our first recruiting class,” said PFW men’s track and field coach Alex Carridine.  “One of the things that stood out about Luke was a big jump in his performances.  He was able to repeat big jumps two performances in a row.

‘Luke is very humble,” continued Carridine.  “When I talked to him, he was very calm about his performances.  He is a great person with a great family. He is very smart and disciplined.  With a young team, Luke is someone that can set the temperature of the room.  He is one of those guys that can say ‘Hey coach wants us to focus in and concentrate.'”

Purdue Fort Wayne is regenerating the track and field program after the former Chancellor cut the program in 2003.  That was a different Chancellor and now the new Chancellor is looking for ways to beef up various programs.

Indoor and Outdoor track and field will be added beginning in 2019-2020.

“A major factor that helped me decide to go to PFW is because it is a smaller school that is close to home but not too close,” said Beehler.  “I think it will be a good to attend college and run track relatively close to home. My parents will be able to come and watch a lot of meets, and it will be easier to be able to visit my family.

According to Beehler, Valparaiso and Indiana State took an interest in him, along with Purdue Fort Wayne.

“I’m still undecided with what I want to study, but am leaning towards finance or marketing,” explained Beehler.  “I currently participate in 100, 200, 4×100, and long jump. I will be doing long jump at PFW.”

“He is a fantastic student in the classroom,” said Carridine.  ” I am really excited to have Luke on board.  You know he is going to lay a foundation to last for quite a while.”

Carridine says they currently have 16 recruits already.  The Mastodons would like to have 30 on the men’s track and field team to start, then boost that to 50 the following year.