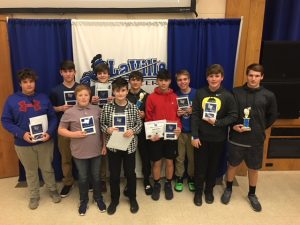 The seventh grade finished the season with an 8-1 overall record and Hoosier North Athletic Conference runner-up.

“We Started out slow and we gained momentum as we went,” said 10th-year seventh grade coach Frank Borton.  “Most of the kids grew and learned what we taught them.  Can’t wait to see how much they grow by next year.”

Hit of the Year: Noah Richhart

Block of the Year: Garrett Wagoner

The eighth grade finished the season with a 9-0 overall record, and Hoosier North Athletic Conference Champions.  This is the third time the eighth grade has finished unbeaten since 1995.

The eighth grade also outscored the opposition 303-28.  The 303 points scored is a new school record.

“It was a tremendous group of kids,” said eighth grade coach John Mumm, in his 23rd season.  “It was a group  of kids that sometimes the best thing we could do was get out of their way and let them play.  This group had everything you wanted – size, speed, we could strike quickly or grind it out.  We were also pretty stout on the defensive side of the ball.”