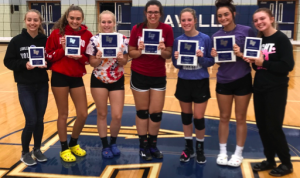 LAKEVILLE, IN. – The LaVille Volleyball team recently held its

Kertai was the leading hitter with 109 kills in 571 attempts, while Allison Medors was second in hitting with 83 kills in 454 attempts, and Rebekah Beehler was third with 72 kills in 351 attemots

Coblentz led with 38 service aces, Kapke and Kertai each as 24 aces, while Amelia Mears added 23.

Kertai led the defense with 392 digs and Kapke had 388 digs.