BREMEN, IN. – The junior high football team traveled to Bremen for a non-conference game.

Lucas Plummer, Mason Stepp, and John Ziola each scored a touchdown as the seventh grade picked up a 19-0 victory.

Stepp also led the defense with a fumble recovery. 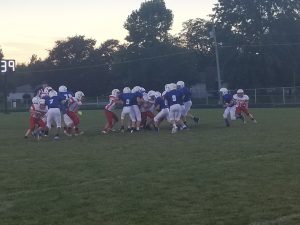 The eighth grade continues to have success following a 44-0 win over the Lions.

LaVille will travel to North Judson-San Pierre Saturday for a 12 p.m. kick.

The final game of the season will be Wednesday, October 10, at Lancer Field.  Kick is scheduled for 5 p.m.