LAKEVILLE, IN. – Second-year LaVille Girls Soccer coach Daniel Pleninger and the coaching staff got their first chance to observe the Lancers play an opponent during a scrimmage against Argos at Newton Park.

LHS is coming off a sectional title, a 15-4 overall record, and finished the regular season as the Indiana Soccer Coaches Association #2-ranked team in the final Class 1A poll a year ago. 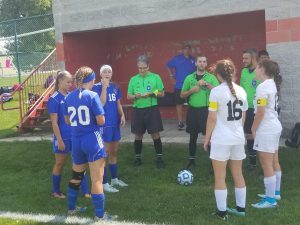 “Overall I thought the team played well considering the circumstances I created for them,” said Pleninger.  “This was the first match that we have had nearly everyone (Micah Edwards missing) so I was trying different groups of players in the offense and the defense and some in brand new positions. Also I changed the formation after each period so I thought that the team did a good job of figuring things out on the fly.”

According to Pleninger, “Offensively we still need to work on moving as a team. Our first two periods we struggled to connect passes, but we did a much better job keeping possession during the third period. The team did a better job of playing simple passes that allowed us to control the tempo and open up gaps in their defense. We were able to create enough scoring opportunities and we will capitalize on them as the season goes on.” 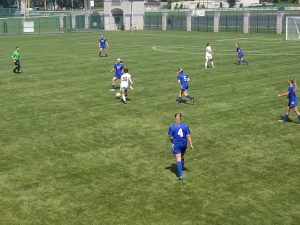 And with the substitution pattern and new players in new positions, Pleninger felt,  “Defensively we were disorganized in the first period but cleaned things up during the second and third periods. Our pressure on the ball was great but we struggled to mark people off the ball. That will improve as our team chemistry and communication improves. Our keepers both played very well, Trynitie stopped several 1v1 opportunities that we should not have put her through, and Casey was able to make a save on a corner kick.”

LaVille will open the regular season Tuesday against South Bend Clay.  The match will take place at Newton Park and start at 5 p.m.