WABASH, IN. – LaVille traveled to Wabash Friday for a high school football scrimmage.  It’s the “we have practiced and hit each other, now we get to hit someone else night” after two weeks of practices and drills.

Scrimmages have two options, according to the IHSAA.

LaVille returns several young players from a 8-5 season a year ago that found the Lancers winning the first sectional since 2003. 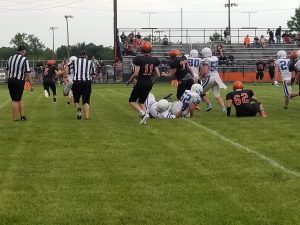 The LHS defense hit the field first Friday and held Wabash from moving the ball.

The Lancer offense took the ball and found the end zone during their opening 15-play series.  Kolby Watts scored a rushing touchdown for LaVille.

Following change of possession, and during the portion of plays starting from the 10-yard line, Andrew Dill and Robby Pope scored a touchdown each, while Evan Bettcher hit pay dirt twice. 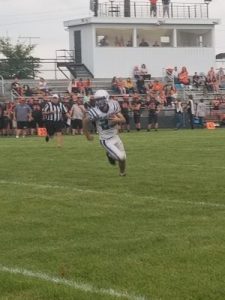 On the next set of plays, the ball is placed at the 35-yard line.  Dill once again found the end zone, this time using his speed and the blocking of the left side of the offensive line.  Dill also looked to be on another scoring run, but the ball was knocked loose.  Devon Schoff alertly scooped the ball up and took it the final six yards on the scoop and score for a TD.

Like all coaches Friday, LaVille coach Will Hostrawser saw some good things and things that need sharpened up on.

“Honestly the way we play right now is irrelevant,” said the sixth-year LaVille coach.  “We have to be playing our best football at the end of season.

“The journey starts tomorrow when we watch film,” Hostrawser continued.  “We will carve it up.  Believe me, we saw a lot of good things.  I’m not really interested in those; those won’t take us farther than where we are. I’m interested in things we can shore up.

Hostrawser was proud of his football team.

“The guys represented LaVille well today,” said Hostrawser.  “The guys on the reserve team, jumping out there in new positions.  We did all kinds of good little things.  Little things that make a huge difference.”

LaVille will open the regular season August 17 at Culver Academy at 7:30 p.m.