LAKEVILLE, IN. – The 2017 LaVille Football team that won the first IHSAA Sectional championship since 2003 has been selected the Top Team Athletic Story of the 2017-2018 school year. 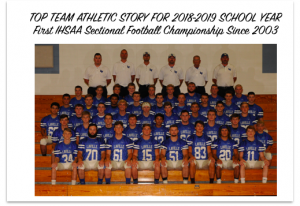 After a poll that www.lavilleathletics.com had open for nine days, a total of 78 votes were cast and LaVille Football received 40-percent of the vote.

The first boys basketball undefeated regular season in school history was a close second with 32-percent, while the first IHSAA girls sectional title since 2005 finished with 19-percent to close out the top three. 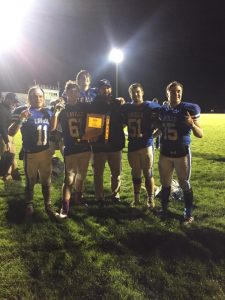 “Winning the sectional is a super special feeling,” said LaVille Football coach Hostrawser of the first football title since 2003.  “In football they are extremely hard to come by because you have to string together three solid games against tough competition.  I will not soon forget just standing and watching our students, fans, and community celebrate together on the field.  The pure joy and sense of achievement and pride was very evident.”

“Our defense stepped up and got it done,” said Hostrawser of the final Triton series of plays.  “When they lined up for the field goal – I called timeout.  In the huddle, I asked for a strong rush up the middle because their QB (who was their holder) was not very mobile and I thought pressuring him would rush a decision if they faked it.  When they lined up in their field goal formation after the timeout, they didn’t have a kicking block – so I figured a fake was coming.  Our guys executed it just as I had asked – rushing hard up the middle and covering their receiver – they did a great job.”