LAKEVILLE, IN. – 2018 graduate Lindsey Aschenbrenner has been selected the Top Individual Athletic Story of the 2017-2018 School Year. 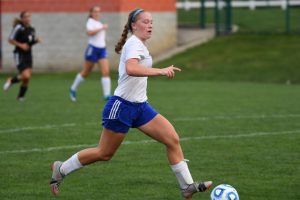 After a poll that www.lavilleathletics.com had open for nine days, a total of 333 votes were cast and Aschenbrenner received 26-percent of the vote.  Nathan Nichols-Petersen finished second with 14-percent of the vote, while Aryn Eash, Austin Dove, and Luke Beehler were within two percentage votes for third, fourth, and fifth, respectively.

“The results of my senior soccer season showed the work that me and my fellow seniors put in over the years,” said Aschenbrenner.  “Being able to beat many large school’s like Elkhart Memorial, Plymouth, and South Bend Adams on our way to winning sectionals was a nice way to end many of our soccer careers as we move onto the next part of our lives without soccer. 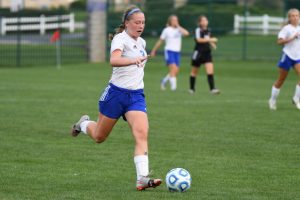 “Breaking the scoring record was always something I desired to do,” continued Aschenbrnner. “And it was great to see the hard work pay off my senior year.  I couldn’t hvae accomplished any of that without my teammates pushing me in practice and supporting me every match.”

Aschenbrenner broke the single-season record for goals scored during the 2017 sectional title run.  She finished with 38 goals during 2017 and 78 goals scored overall to break the all-time record held by 2015 graduate Heather Roeder.