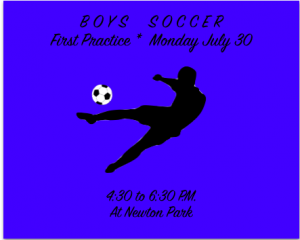 Prospective players are reminded that each student-athlete MUST have all athletic department forms filled out, signed and turned in prior to the start of the first practice.

The Lancers finished 13-5-1 overall and are defending Hoosier North Athletic Conference (HNAC) regular season and HNAC Tournament champions.  LaVille graduated eight from a team that advanced to the IHSAA sectional championship match a year ago.  According to Coach Christy, Rilye Cox, Austin Dove Nick Felke, Auston Stanley-Horvath, and Rilee White are expected to be top performers during the 2018 campaign.

Christy’s crew will open the season at the Argos Jamboree on August 11 at 7 p.m.

Check back at www.lavilleathletics.com for a season preview.