But he’s not done with his baseball journey.

And what a journey’s it has been.

As father Dave Herbster says: “It’s a story of perseverance.”

Herbster, a graduate of LaVille Jr-Sr High School in Lakeville, Ind., and Grace College in Winona Lake, Ind., is in the Czech Republic, where the outfielder hit a blistering .613 in the first half of the split season with Hluboka Baseball Club.

Before going to the central European nation through Baseball Jobs Overseas networking, the 6-foot, 210-pounder played at LaVille, Grace and independent pro ball in the U.S. 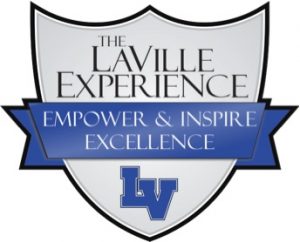 Herbster, who was born in Goshen, Ind., was a four-year varsity player and two-time all-conference performer at LaVille, where his coaches were Gene Baker at the beginning and Dan Jones for the last two seasons.

“(Jones) was perfect for me because his thing was personal fitness,” says Herbster. “This kind of lit the first spark in value of personal health and it helped me rehab back from a broken ankle.”

At Grace, Herbster was part of a program led by head coach Bill Barr. After being on the junior varsity his first two seasons, Q hit .320 as a junior and kept on working to get better.

“I literally treated it like a full-time job in college,” says Herbster. “It was over 40 hours a week in the off-season (fall). My senior year, the game felt easy that fall in scrimmages so I graduated early to find better competition.”

After graduating early, he went to the Pecos League and played in the spring league with the 2016 Houston Apollos. After pulling his hamstring three times, he came back to Indiana to rehab and get a job.

“I didn’t want to be done playing because I knew why I had failed and knew I could fix it,” says Herbster. “But it meant I had to wait a whole year before playing and I had to get a job because I was newly-married (to Katrina).

“Looking back, I’m not sure how I got through that summer because I worked each weekday at the Menards in Warsaw from 5 a.m. to 3 p.m., had physical therapy in Mishawaka on Tuesdays and Thursdays, played in South Bend for the South Bend Cardinals on Tuesdays, Thursdays and Saturdays (I was only cleared to jog, but it was still live at-bats), cleaned medical buildings at night for two hours, lifted (weights) on Mondays, Wednesdays and Fridays, and all while finishing up my masters work online.

“That summer I lived on four hours of sleep and Rockstar Energy. But I had to because we were poor. I had therapy to pay for and a dream so couldn’t give up. 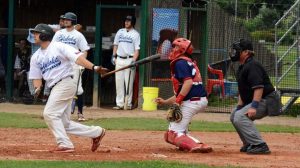 Herbster went back to the Pecos League in 2017, hit .360 in the spring league with the Bisbee Sea Lions and was signed for the summer league by the Hollywood Stars. After a 1-for-7 start a a pinch hitter for the expansion team that played all its games on the road and Herbster was cut.

“I began the 28-hour drive back to my wife with the same problem again: workout for another year and wait for another opportunity,” says Herbster. “I couldn’t quit because I didn’t feel I had failed. After 10 months of lifting, working delivery, going to a speed guy and taking at-bats against my buddy that pitched with me in college, I got an email from (the Czech Republic) for this opportunity and I took it.”

Not only has Herbster been productive on the field, he enjoys the treatment he’s getting from his team.

“The thing that I like most is that for the first time in a long time I’m wanted and being taken care of,” says Herbster. “It’s not like I’m being paid well, but they are taking care of my housing and most my food, transportation, gym membership and then paying me a little bit on the side which covers supplements, food and a little bit left to help with student loans.

“They even forced me to take a nice litter two day vacation to Prague.”

When he’s not playing, working out or seeing the sights, Herbster is often giving lessons.

“It’s the same game and kids are the same everywhere, but the emphasis is different here then in the States,” says Herbster. “These differences promote different flaws.

“For example, the emphasis in pitching is to throw strikes so most kids do not let the arm ride up the kinetic chain and have an arm -irst approach that cuts down on velocity.

Emphasis on hitting was power so most kids dipped, stayed connected well, but pulled off. In the U.S., we emphasize — for the most part — to put it in play and play defense so we play much better defense and make better contact but rarely do you see people get connected and get true power out of themselves.” 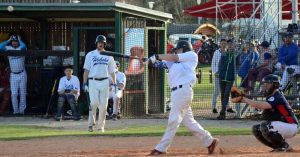 Herbster’s team of 22 players was one of top squads in the lower tier and will play against the lower teams in the top division in the second half of the season.

“It’s like the bottom 4 MLB teams playing the top 4 AAA teams to earn their way back or to the majors,” says Herbster. “We’re the best of the second level so some games some players won’t show.”

Herbster is the only actual import on his team, but there is one player from the Ukraine and another from Cuba. The top four teams in the upper division have about four imports each.

There is a language barrier, but it isn’t awful.

“Most speak some English,” says Herbster. “Fortunately, a couple players speak it well. The struggle is in lessons. There’s three ways to learn: auditorial, visual and aesthetically. I can usually work with two-and-a-half.”

It also helps that Katrina has joined Quentin. He left for the Czech Republic in early April but she had a stay behind to finish her duties as a teacher at LaVille Elementary.

“The language barrier was more frustrating during those two months,” says Herbster. “She really enjoys fitness and is currently studying through (the National Academy of Sports Medicine) to be a certified personal trainer, so she studies when I’m preoccupied.”

Herbster says his best qualities as an athlete probably also helped him as a student (he carried a 3.47 GPA as an undergrad and 3.62 while earning his masters).

“I work hard and learn quickly,” says Herbster. “You work out six days a week and work at your game, you’ll get better.

“I’m a good gap-to-gap hitter (from the right side).

“The rest of my game plays pretty average. I run a 6.8 to 6.7 60-yard dash time and top out at 88 (mph) from the outfield. I’m hoping to be able to do some of the Top Velocity program to gain some real arm strength this fall.”

What are Herbster’s long-term baseball goals?

“I’m hoping to find my ceiling,” says Herbster. “I want to see at what level I can play. I’m hoping to get to Australia or Japan to keep playing but have no idea how to get there yet.

“I just want to see how far I can push this.”

Herbster can see a job as an athletic director or coach in his future.

“I want to help kids reach there potential,” says Herbster. “Looking back, I really didn’t know what to do or how to do it. A lot of kids work hard but they just don’t know or have plans to help them improve. They don’t know the best way to do it.

“I’d also love to start a nutrition company that focuses on customizable, workout-goal based nutrition. I feel like these companies are inefficient and structurally backward.”

Hannah graduated in the spring from Grace, where she played softball and finished her career as the Lancers’ all-time leader in stolen bases. The 6-foot-4 baseball-playing Isaiah is heading into his junior year at LaVille.

The first baseball camp Quentin ever attended was at 10 with Mark Haley, who was then manager of the South Bend Silver Hawks and now runs the South Bend Cubs Performance Center. Herbster has been an instructor at the facility located at Four Winds Field.

“(Haley) also worked with me between my junior and senior season in college, fixing a fundamental flaw to give me more power involving staying connected longer. He was like my swing mechanic in that I started to go to him when I needed a tune-up.”

Herbster also practiced year-around with Jeff Rinard at Chasing A Dream in Lakeville and later with Jeff Jackowiak.

From 13U to 18U, he played travel ball with the Elkhart Titans.

“(Titans coach) John Drew definitely cares about his players and that atmosphere was nice for me,” says Herbster. “He also game me the freedom to work on aspects of my game during games as well and even allowed me to continue to use their facilities in college and beyond.”

Our thanks to Steve Krah, RBI (Reporting Baseball In Indiana), for sharing this article.