LAKEVILLE, IN. – When LaVille Jr-Sr High School applied for the Indiana High School Athletic Association Unified athletic program, no one really knew what kind of affect it would have on Lancer Nation.

“We learn from our peers,” said LaVille Unified Coach Tammie Radican.  “Unified sports provide a peer modeling example that all students learn from.”

LaVille applied for a Unified team in the 2014-15 school year and was awarded the opportunity. 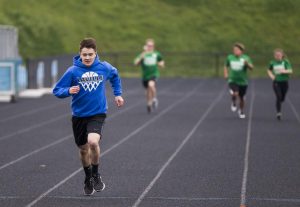 “Our first competition was track in 2016,” recalls Radican.  “And we participated in the IHSAA sectional and an invitational at South Bend St. Joseph.”

LaVille is currently the only Marshall County school with a Unified team.  Other schools nearby are Elkhart Memorial, LaPorte, Michigan City, Tippecanoe Valley, Valparaiso, and Warsaw.

Since joining the IHSAA Unified program, LaVille has its share of success. 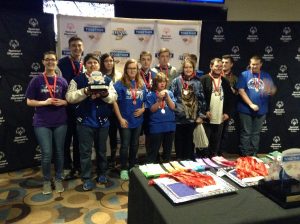 The Lancers finished state runner-up in Bocce ball in 2016, and third in the state in bowling in 2018.

“What I love about unified was when we did the basketball scrimmages,” says Radican. “There were about 30 partners around the outside of the court surrounding the unified athletes.  The unified partners are the support, which is what is supposed to happen that was the perfect example of what unified is about.

“I love is the relationships and it truly breaks down barriers for both the partners and the unified kids,” continued Radican.  “The partner is to help the unified athlete be the best they can be.”

It’s also a special feeling for the unified partners. 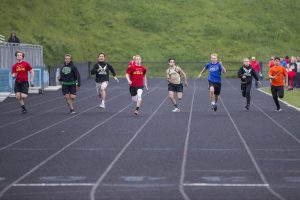 “The partners are walking away saying to themselves that we realize we are more a like,” said Radican.  “And they don’t see the disability.

“For the athletes they gain trusting friendships and a sense of belonging that is very new to them,” continued Radican.  “It is very inclusionary and not exclusionary. Unified sports have made our school a more inclusionary environment.”

The environment started to change, according to Radican, during the first Unified awards banquet that was quite touching.

“I think when you look back at the first year we did the banquet,” recalled Radican.  “That was a catalyst and turning point. When the Unified athletes got their letter jacket and letter . . . student partners, the unified athlete, and parents . . . there was not a dry eye. They got to understand the ability how important to participate, compete. They want the ability to compete. They are a part of the school.

Next year, LaVille will be five unified sport school, after adding flag football,

“They all win and they are all winners,” said Radican.  “It’s how they feel about themselves when they compete.” 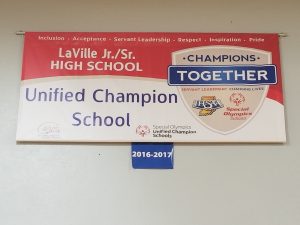 There is a criteria that you have to meet each year in order to maintain the IHSAA Champions Together Banner.

So far, LaVille has been able to raise almost $4,000 for Special Olympics.