LAKEVILLE, IN. – The spring of 2018 was something to remember for the LaVille Co-Ed Track team. 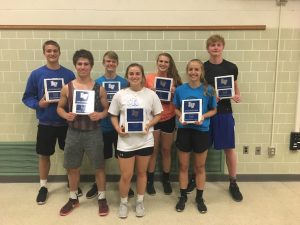 Rookie of the Year: Nick Felke

Not only did a total of 40 student-athletes participate on the Lancer team, but there was a sectional champion, regional qualifiers, and a pair of IHSAA state meet qualifiers.

From the usual inclement northern Indiana weather that kept the track team indoors, to a track that was not complete due to weather and a held up construction project, to bus rides down the road to another school just to get to practice.

Several student-athletes reached a personal best in their respective event throughout the season.  Luke Beehler, Austin Dove, the 4 X 100 relay team of Kolby Watts, Ethan Yoder, Nick Felke, and Beehlera, along with Kalista Lemberis advanced in the state tournament.  Beehler and Dove both reached the ultimate goal of participating in the IHSAA state meet.

Beehler and Dove were able to accomplish something that a LaVille Boys Track team member has not done since 1996.

And, during the 2018 Hoosier North Athletic Conference Championships, the 4 X 100 Relay team of Kolby Watts, Luke Beehler, Ethan Yoder, and Nick Felke broke the second school mark of the spring, sprinting to a time of 44.79 seconds. The old record, set by Ernie Hall, Jeff Tyler, Mike Ingle, and AJ Wright, was 44.8 in 1982.

“We learn from our experiences,” concluded coach Beehler. “And get ready for next year.”