MISHAWAKA, IN. – Luke Beehler could feel it.

It was one of those good days to be involved in a field event.

The top three plus any alternates would advance to the Warsaw Regional on Thursday May 24. 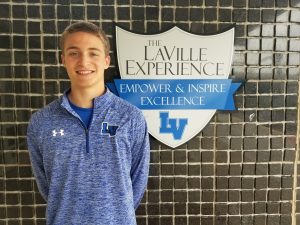 “It was a good day to jump,” recalled Beehler. “We had good weather conditions.”

Beehler felt good about the preliminary round, where he had the best jump and would get to jump last in the finals.

“Everyone got three jumps,” explained Beehler. “Then the top nine move on to the finals.

“Prelim jumps carry over to the finals so you have to stay focused because anyone could get a good jump. I had the best jump in prelims.”

Feeling confident with several teammates around him, along with coach and mom Kathe Beehler, Luke headed to the finals.

” I just did my normal start,” said Beehler of his entrance toward the long jump pit.  “I felt good off the board. I landed and when they said how far it (the distance) was I was kind of in shock.

“I didn’t know what to think,” he continued.  “My teammates came up gave me high fives, hugging me, telling me good job.”

“She like tackled me,” explained Luke. “It was a special moment.”

According to Beehler, it was his fifth jump overall, but second in the final round.  He was the last of nine jumpers in the finals, so there was still another round to go.

“Anyone could have beat it,” said Beehler.  “I just had to keep doing what I did before.”

Beehler not only survived the final round of jumpers, but his leap of 23-feet, 1-inch set a new school record AND he also claimed the Penn Sectional High Jump Championship by 20-inches (or 1-foot, 8-inches), depending how one looks at it.

“It feels amazing,” concluded Beehler. “Its cool I was able to do that.  I just want it to carry over in regional and do well in regional.”