LAKEVILLE, IN. – Records are made to be broken! 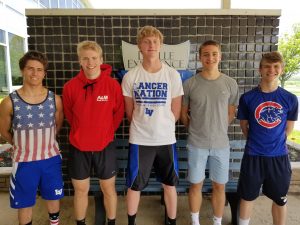 As indoor practices turned to outdoor opportunities, mechanics were refined and confidence began to build.

The first record broken was on a windy Tuesday at Winamac High School.

According to Dove he made all but the second jump up to 6-foot-2.

“On the first jump at 6-foot-5 I didn’t kick my legs,” recalled Dove.  “On the second jump I was able to tuck my chin, allow my legs and butt to get over the bar.

“It was incredible,” continued Dove.  “It is a dream I’ve had. Everyone said I would be good at (high jump).

The whole team was cheering me on. They wanted me to break the record.”

“I wasn’t even born yet,” explained Dove.  “I just want to stay healthy now. I want to work on getting the form down and focus on the back. Most high jumpers injure their back.  I don’t want to have back problems.”

During the 2018 Hoosier North Athletic Conference Championships, the 4 X 100 Relay team of Kolby Watts, Luke Beehler, Ethan Yoder, and Nick Felke broke the second school mark of the spring, sprinting to a time of 44.79 seconds.

Watts ran leadoff, with Beehler in the two spot, followed by Yoder and Felke as the anchorman.

“They had some very good hand offs that were important,” said LaVille Coach Kathe Beehler.  “We kind of had to pick it up in the middle and then drive it home. They each knew what they had to do and they each did their part.”