LAKEVILLE, IN. – Be it the sixth man off the bench, or contributor in ways that don’t necessarily show up on the score sheet, those are the players that add that little extra as a team player.  They may be a hard worker in practice, pick up a rebound or two, pick up a steal, hit a crucial basket or free throw that gives their team a spark.

Junior Riley Wagoner was just that type of player during the 2017-18 LaVille basketball season. 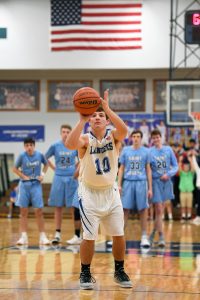 “Riley Wagoner has been the quintessential teammate for the boys basketball team the last couple years!” said LaVille head coach Michael Edison.  “He is someone that comes to practice everyday with a positive attitude ready to work hard and make himself and his teammates better.  He does not take plays off, as he is focused and intense through the entire practice day after day after day!  He does so many little things that do not necessarily get put in the box scores, but make a huge difference in the course of a game. “

The 5-foot-8 junior averaged 0.9 rebounds per game, 0.5 steals per game, and 0.4 points per game for the LaVille Basketball team that finished 23-1.

“He is one of those special people that cares more about the success of team than what he does individually,” concluded Edison.  “He is a huge reason why we had the success that we had this season!”