LAKEVILLE, IN. – The junior varsity basketballs and uniforms have been stored away, but the memories of a fine season, that finished with a 17-game winning streak and 20-3 overall record still linger.

It is junior varsity coach Codee Kimbel and assistant Drew Dutoi that help prepare player’s for the varsity level. 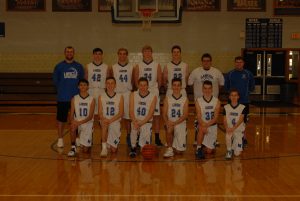 “Throughout the season Drew and I really tried to teach the guys as much as possible about what they can expect when they make the varsity level,” said Kimbel.  “That is one of the main goals. Get these guys ready for varsity basketball and win as many games as we can along the way.”

The JV Lancers started 3-1 before dropping a pair of games to even the record at 3-3. It was at that point that Coach Kimbel noticed something missing.

“At the beginning of the season I think we lacked a strong competitive drive,” recalled Kimbel.  “But as the season progressed, after we lost two straight games to put us at 3-3, I saw a change in how we approached drills in practice. The guys were really going at each other and showing how much they wanted to win.

“It was refreshing for us to see as coaches and really fun to watch,” continued Kimbel.  “We focused on one game at a time and managed to put together a great run to end the season at 20-3. Which may have been a little overlooked because the varsity had a pretty good run of their own.”

When asked what game(s) he recalls most, Kimbel reflected on the TCU Bi-County Basketball Championship.

“Whenever I talk about this season I find myself talking about the Bi-County Tournament,” explained Kimbel.  “Drew and I were never able to win it all when we were playing so that makes it so much sweeter. Going into that championship game I tried to emphasize that this could be their only opportunity to win Bi-County. I hope not, obviously, but I didn’t want them to take it for granted. They went out and took care of business better than I could’ve imagined.”

Kimbel credits LaVille head coach Michael Edison for teaching him more about the game and appreciates the opportunity to be on staff.

“I know I’m nowhere near as vocal as Coach Edison but I learned so much from him as a player and I continue to learn from him as a coach,” said Kimbel.  “Drew and I both do. And we are very appreciative of the opportunity to be apart of the LaVille basketball program. It’s pretty amazing to see how far it’s come since we were playing.”

“Thanks to all the parents and students for the support throughout the season,” concluded Kimbel, a 2011 LaVille High School graduate. “Thanks to Drew for stepping into his first year coaching and always having something extra to say when I don’t.  It was such a fun season and I couldn’t be more proud of all of the players. I’m looking forward to working with them and starting with the younger guys in the offseason so we can keep getting better. ”