LAKEVILLE, IN. – Each year since 2007, the LaVille basketball program has been asked to hand out the Zane Triplet Dedication Award following the conclusion of each season.

Zane was a student at LaVille High School entering his senior year.  During the summer of 2007, he tragically killed as a result of injuries in an automobile accident. Zane played basketball and golf. He also played soccer at LaVille. Zane belonged to the Union Township 4-H where he was the township ambassador and played in the Marshall County Jr. Golf Tour. 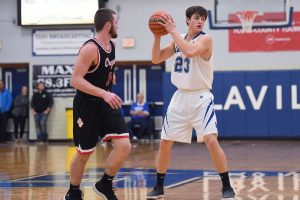 “The award goes to a basketball player who is dedicated to the team, coach, program and sport,” said Tony Triplet, Zane’s father.  “Jacob Good exhibited these qualities throughout the season and his career.  Jacob is someone who blossomed later in his high school career and is someone who when you watched truly enjoys the game of basketball.”

Good was very humbled when his name was announced as the 2018 Triplet Dedication recipient.

“I am very grateful,” said Good.  “It is such an honor. I really didn’t expect it. I am very thankful to the Triplet Family for all they do.”

Good’s name will be added to the plaque, along with the other recipient’s, in the athletic hallway of LaVille Jr-Sr High School.

Good helped the Lancers to a 23-1 record and the school’s first-ever undefeated regular season  in school history.  Good averaged 9.5 ppg, 6.6 rpg, and shot 73-percent from the field.  He also led the team with 36 blocked shots, while adding 25 steals, and dishing out 36 assists.

In memory of Zane Triplet, who from a very early age loved the game of basketball.  Zane believed in hard work, his teammates, and above all the TEAM. This award is given to a LaVille varsity basketball player who is dedicated to those principles.