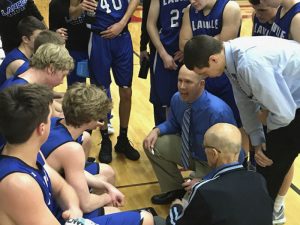 “I am humbled by the honor,” said Edison.  “But any recognition goes to the amazing assistant coaches and the unselfish, hard working, and resilient players I was blessed to work with on a daily basis!  They were a joy to be around each every day!

“I am most proud of the way all of the players on the team act in the hallways and classrooms at school,” continued Edison. “They treat people with respect, work hard, and truly care about one another. I consider myself very blessed to have been able to coach these guys this year!”

BELOW ARE THE IBCA BOB KING DISTRICT COACH OF THE YEAR RECIPIENTS:

Michael Edison is an IBCA District 1 Coach of the Year after guiding LaVille to a 23-1 campaign that included the championship of the Hoosier North Conference at 7-0. 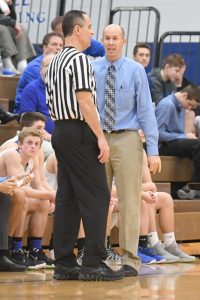 Edison was a standout player at Plymouth High School, where he helped the Pilgrims to 20-4 and 23-3 records as a junior and senior while playing for his father, Jack. He was chosen to the 1995 Indiana All-Star team and was runner-up in voting for that year’s Mr. Basketball award.

He went on to play four seasons at Bethel College for coach Mike Lightfoot, helping the Pilots win NAIA national championships in 1997 and 1998. He also earned a bachelor’s degree in education.

Edison began his coaching career at Concord, where he served as JV coach in the 1999-2000 season. He then returned to Plymouth, where he assisted his father for seven seasons, highlighted by the Pilgrims winning the 2007 Class 3A state championship.

He became the head coach at LaVille beginning in 2008-09. During his tenure, the Lancers have won 15 or more games six times and 21 or more games twice.

Edison taught social studies for 10 years and is completing his fifth year as an assistant principal at LaVille.

Rob Yoder is an IBCA District 1 Coach of the Year after leading Westview to a 28-2 season that included sectional and regional titles plus a co-championship of the Northeast Corner Conference at 10-1.

Daniel Cox is an IBCA District 2 Coach of the Year after directing New Castle to a 27-3 season that included sectional, regional and Hoosier Heritage Conference championships.

The Trojans got off to a 16-0 start to the season, the best start in the program’s 105-year history, and posted a school-record 22 regular-season victories before falling to Culver Military in the Lafayette Semi-state.

Cox, a 2005 graduate of New Castle, has guided his alma mater to a 79-43 record in five seasons. The Trojans also won the HCC in 2016, and he twice has been selected HHC Coach of the Year.

Matt English is an IBCA District 2 Coach of the Year after leading Beech Grove to a 19-6 season that included the co-championship of the Indiana Crossroads Conference at 6-1.

English will be the head coach for the 2018 Indiana Junior All-Stars.

Scott McClelland is an IBCA District 3 Coach of the Year after guiding Morristown to a 28-2 season that included the Class A state championship. The season also included sectional, regional and semi-state titles as well as crowns in the Wheeler North/South Holiday Classic (in the Hoosier Gym) and the Shelby County Tournament.

His overall record in 10 seasons with the Yellow Jackets is 130-101 with a previous sectional title in 2007 to go along with the 2018 tournament run. He is the all-time winningest coach in boys’ basketball at Morristown and has guided the program to Shelby County Tournament crowns in 2005, 2006, 2017 and 2018.

Todd Sturgeon is a District 3 Coach of the Year for the second consecutive season after leading Floyd Central to a 24-2 campaign that included a Hoosier Hills Conference championship and a runner-up finish in the Seymour Sectional. This year’s team set a school record by allowing just 44.7 points per game and its 24 victories were the most for the Highlanders since 1989.

In four seasons at Floyd Central, Sturgeon has compiled a 70-25 record.