INDIANAPOLIS, IN. – The Indiana High School Athletic Association has announced the names of 13 seniors who will be honored next month with the 2018 C. Eugene Cato Memorial Scholarship Award.

Cato Memorial Scholarships to be presented to 13 Seniors The Indiana High School Athletic Association, Inc. is pleased to announce this year’s group of 13 senior student‐ athletes who will be honored next month with the 2018 C. Eugene Cato Memorial Scholarship Awards. To reward the efforts of Indiana’s complete student‐athletes, Methodist Sports Medicine, Indiana Farm Bureau Insurance, Indianapolis Colts, Indiana Fever, Indiana Pacers, Sport Graphics, Inc., and WTHR‐13 have partnered with the IHSAA to sponsor the program. These well‐rounded, positive role models have demonstrated excellence in academics, school and community involvement, character, sportsmanship and citizenship. 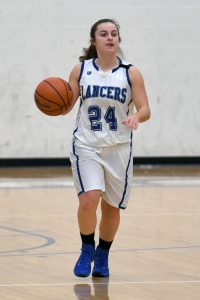 Congratulations to LaVille senior Aryn Eash on being selected to this group of student-athletes.

“It is a huge honor,” said Eash.  “It just kind shows that everything that I have done throughout my high school career is paying off.” 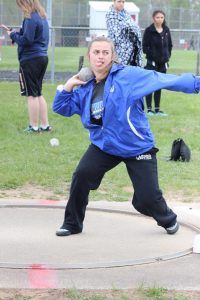 Eash, who participates in soccer, basketball, and track, acknowledged the LaVille community for being a part of her life the last several years.

“This is also a good reflection on the school,” explained Eash.  “The LaVille Community has been a big part of my life all through school.   LaVille has prepared me for the real world, and because of this amazing community I am as prepared as I could be for whatever comes next.”

Each individual will receive a $2,500 scholarship for their prep accomplishments and be recognized on Thursday, April 19, 2018 at the Indiana Roof Ballroom in downtown Indianapolis as part of the Thomas A. Brady Sports Achievement Awards established by Methodist Sports Medicine. The 2018 IHSAA / C. Eugene Cato Memorial Scholarship Award Recipients:

ARYN EASH has dedicated all four years at LaVille High School to participating in six different clubs and three different sports (soccer, basketball, tennis). In addition to six clubs, she joined DECA and the National Honor Society her sophomore year, was part of the Academic Bowl Team her junior year and partook in Fellowship of Christian Athletes her senior year. Her volunteer work has taken her many places, the farthest being Costa Rica on a mission trip. Eash was deemed captain of the track and basketball team beginning her sophomore year, and soccer captain her senior year. She earned the position of Student Council Vice President and Junior Class President, and followed it up with National Honor Society and Class President her senior year. Eash is number one in her class of 75.