LAKEVILLE, IN. – The 2018 edition of LaVille Girl’s Tennis is smiling from ear-to-ear. 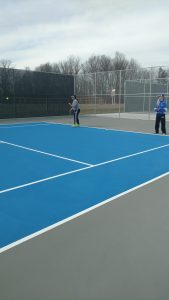 “It was Amazing,” said Haisley as she watched her squad take to the courts for the first time this season.  “Honestly, I don’t know how to put it into words.

The last time LaVille Girl’s Tennis played at home was the final match of the 2016 season.

“We always come into the season with excitement,” explained Haisley.  “But being able to walk out to new courts, they are so bright, it’s a little more uplifting, a little more exciting. To be able to practice and play at home gives us an extra boost.”

The old courts were cracking, paint was coming off, and, due to the weather, the net posts pushed up.

“There was just joy,” concluded Haisley of the first practice outdoors of the season.

Haisle,y who is in her fourth season, has 18 girl’s tennis players for the 2018 season

The girl’s tennis team will face South Bend Riley on Wednesday April 4.  The home opener is set for the first serve at 4:30 p.m.