It was an opportunity to celebrate several accomplishments and recognize contributions from the Class of 2018 one final time.

Coach Michael Edison’s club finished with a 23-1 overall record and 7-0 in the Hoosier North Athletic Conference.  It was also the first-ever undefeated regular season for the Lancers and the first outright conference title since 1982. 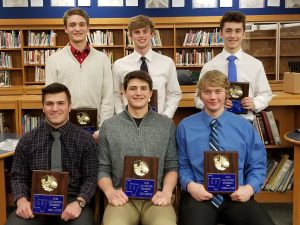 “I was very pleased to see so much growth from all of my players from when we started the year in November until when we ended in March,” said Edison, who just completed his 10th year as the LaVille skipper.  “It is neat to see kids buy in, work hard, and see positive results.  When we played Lakeland in our first scrimmage in November I really thought it was going to be a long year.  It was a nice surprise to have the guys play so well and improve so much.

LaVille Basketball witnessed several accomplishments during the 2017-18 season.  The Lancers won the Kankakee Holiday Tournament Championship, the TCU Bi-County title, the HNAC champs and first outright conference trophy since 1982, along with the first undefeated regular season in school history.

“I think the guys are beginning to look back and enjoy some of the accomplishments they had this past season,” explained Edison.  “It is hard to do during the season because we are always looking to the next game or challenge.  Winning the holiday tournament we were in was a nice Christmas Break treat.  The guys followed that up with a hard found TCU Bi-County title that will always be etched in their minds.  The guys did not slow down as the season continued as they finished up strong with the HNAC title and went undefeated during the regular season.

“This will be a team that I look back on some day with fond memories and it won’t be simply because of their success on the basketball court,” continued Edison.  “This group of guys were excellent representatives of our school on the court, in the classroom, and out in the community.”

“I was very blessed to be able to work with five awesome seniors this year,” said Edison.  “Isaac Hall and Jake Anders were my two managers and they really developed into solid young men who I could count on all the time.  Jake even did a lot of work on Hudl for me and would practice with the team when we needed an extra person.

“Dakota Figg worked extremely hard and improved greatly from the start of the season until the end,” continued Edison.  “He is a very polite young man who really pushed the other guys in practice and really fit well in with the team.  Dalton Dove and Jacob Good were amazing players for me this year.  Both of them are in the top 10 of their class and are excellent leaders.  They both improved tremendously from last year and are going to be very difficult to replace next year.  Essentially, they are not going to be replaced, but rather other guys will have to step up and try to fill in the best that they can.  I am going to miss all five of these guys as they have all found a special place in my heart.”

Following a successful season of LaVille Basketball, Edison finds, “. . . a good core of returners to work with for next year.  It will not be easy, as we will have a big target on our back.  I am looking forward to seeing how the guys work in the off-season.  I am looking for everyone to get better and strive to do their part to make us the best possible team for next year.”